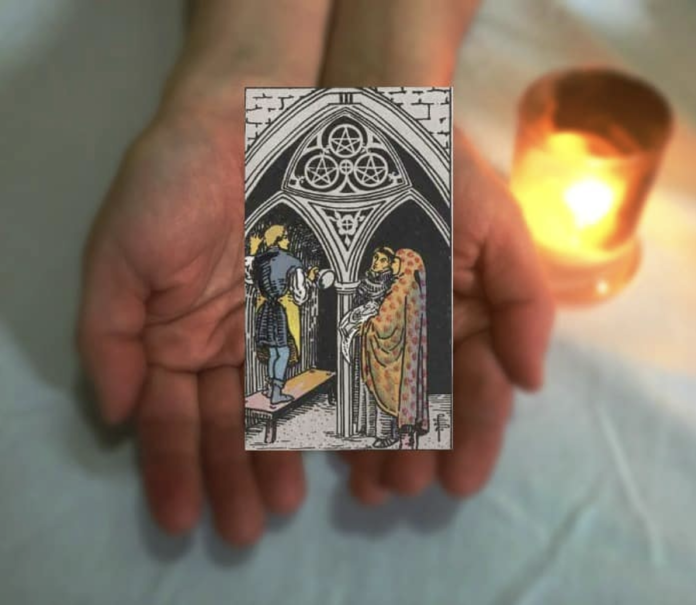 Three of Pentacles Reversed meaning differs from its Upright meaning. This card represents a departure from one’s destiny, a dance to someone else’s tune. A person lives contrary to his own desires and goals. They are driven by logical thinking, not the voice of the heart. Therefore, such people do not achieve any kind of success, because the wrong direction was selected initially.

Moreover, Reverse Three of Pentacles represents the misuse of talent. The situation forces the questioner to engage in an uninteresting business. Also, those around can climb with unsolicited advice, only interfering with their presence. In essence, this is the use of someone for bad purposes, an attempt to do work with someone else’s hands. In this case, the performer may not suspect a trick. In the context of the characteristics of the situation, the inverted position of the Three of Pentacles shows a lack of motivation, work in a slipshod manner.

Three of Pentacles Reversed in Love

In terms of love, the Three of Pentacles Reverse shows the wrong distribution of roles. In such a couple, a man can be a householder, and a woman is forced to earn money. At the same time, the final result of joint efforts does not suit both partners, as a result they can’t reach a compromise. The position of the card speaks of the non-realization and the presence of psychological problems in the couple. The Reverse Three of Pentacles can also mean:

For lonely people, the Three of Pentacles Reversed in Love promises acquaintance with unsuitable potential partners. The querent may not like a certain type, but he will be undoubtedly attracted. The one who asks does not want something so that he materializes his fears. Often, new acquaintances will look like former partners with whom it was not possible to find a common language. Querent needs to find the cause of what is happening inside himself/herself in order to change the situation.

The Reversed card characterizes an unsettled work process. It can be small workshops or agencies. The key role here is played by the intermediate end result. People who occupy key positions do not fit the criteria at all. From this, the work suffers, and the client flow is quite small. In terms of the situation, the inverted Pentacle falls on the need to do not one’s own work, as well as intervention from the side of the authorities. As a rule, Reverse Three of Pentacles in finances indicates the following:

Three of Pentacles Reversed meaning in material questions can also mean financial problems. The person does not like his work, but is forced to work only because of money. Such people tend to work like a dog, turning a bild eye to the things that can’t stand. However, the level of income is not too high. Querent still feels a lack of funds, forced to take on additional tasks. As a result, both the final result of labour and the salary are not satisfying. You will find more information during Tarot free reading online!