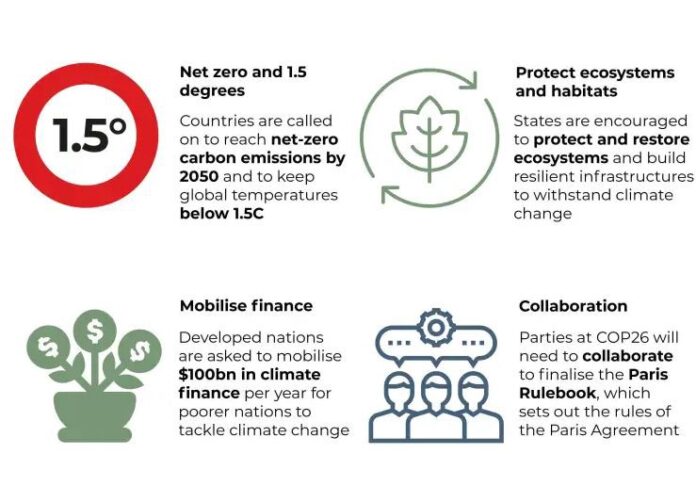 From 31 October to 13 November 2021, world leaders met in Glasgow, UK, at the climate change summit – COP 26. But what does COP 26 stand for and why were the leaders meeting?

The UN Climate Change Conference – COP 26 was a major event bringing together leaders from all countries in the world to agree on how to step up global action to solve the climate crisis.

Almost 30 years ago, global leaders came together to collectively address climate change for the first time. The UN invited countries to sign a climate convention that would commit each to reducing greenhouse gas emissions.

Since then, the countries that have signed the convention have met yearly to discuss progress and challenges.

COP stands for the ‘conference of the parties’ to the UNs climate convention. COP 26 is the 26th meeting of the countries and it was hosted by the United Kingdom in partnership with Italy.

Why was COP 26 important?

Keeping global warming below 1.5 degrees Celcius is the best way to save the planet from the dangerous effects of climate change. Yet the world is currently not on track to do this, with global temperatures on the rise.

According to the latest report of the Intergovernmental Panel on Climate Change, global warming is causing increased, and in some cases irreversible, changes to rainfall patterns, oceans and winds in all regions of the world. More frequent and intense extreme weather events, such as heatwaves, floods and forest fires are experienced in the EU and worldwide.

The EU wants to lead by example in spearheading the global fight against climate change. Over the years, it has adopted some of the most advanced environmental legislation in the world and has achieved its past goals on emission reductions. This year, the EU has renewed its climate ambition in line with the Paris Agreement, by committing to cutting emissions by at least 55 percent by 2030 and making this target a legal obligation through the European climate law.

However, climate change is a global threat and the EU cannot act alone. Find out what other countries were involved at COP 26 on the Utility Bidder website.

At COP 26, the EU encouraged others to step up their commitments and actions to cut emissions and increase adaptation efforts to keep the Paris Agreement’s objectives within reach.

As the largest contributor to international climate finance, the EU is living up to its commitment to provide funding for developing countries to help them face the effects of climate change. And it will continue to contribute to achieving the global objective of mobilising $100 billion per year until 2025. The EU invites other developed countries to make their own contribution to support developing nations.