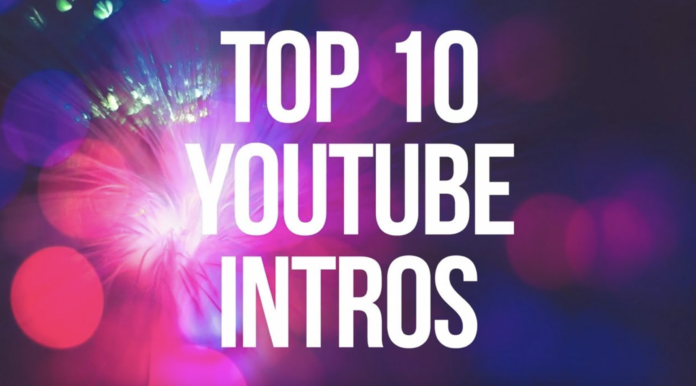 An intro is a short opening sequence that is played at the beginning of a video, typically used as an introduction to the video or as a way to establish the channel’s branding. An intro can include elements such as animations, graphics, music, and sound effects. It can also include information such as the channel’s name or logo, a tagline, or a call to action. Intros can be created using various tools such as video editing software, YouTube intro maker, or using intro templates from stock footage websites. They are typically around 10-15 seconds long, and their main purpose is to grab the viewer’s attention and make them want to watch the rest of the video.

A YouTube intro maker is a tool or software that allows users to create an introduction or opening sequence for their YouTube videos. These tools typically come with various youtube templates, animations, and other design elements that users can customize to create a unique and professional-looking intro.

YouTube intro makers can be found in various forms such as:

Online-based tools can be accessed via a web browser and don’t require any downloads.

Standalone software that can be downloaded and installed on a computer.

Mobile apps that can be downloaded on mobile devices

These tools usually offer a user-friendly interface and often come with various youtube templates, animations, and other design elements that users can customize to create a unique and professional-looking intro. Some YouTube intro makers also offer advanced features such as motion graphics, sound effects, and voiceover recording.

The main advantage of using a YouTube intro maker is that it can save you a lot of time and effort compared to creating an intro from scratch, and also can give you a professional-looking intro that can help to capture the attention of your viewers.

Every good YouTube intro video should have the following elements:

Attention-grabbing opening: The intro should start with an animation or graphic that immediately grabs the viewer’s attention and makes them want to watch the rest of the video.

Branding: The intro should include your channel’s logo and consistent branding throughout the intro to help viewers remember your channel.

Music: The intro should have catchy, upbeat, and appropriate music that matches the tone and theme of your channel and also can set the tone for the rest of the video.

Preview of content: The intro should give viewers a sense of what they can expect from your channel, and what type of content you create.

Call to action: The intro should end with a clear and compelling call to action, such as asking viewers to subscribe to your channel or hit the notification bell.

Short and sweet: The intro should be brief and not exceed more than 15-20 seconds, as viewers may lose interest if it’s too long.

Special effects: The intro should include special effects, such as animations, transitions, and overlays, to add visual interest and excitement to the intro.

By including these elements in your YouTube intro, you can increase the chances of viewers watching the entire video, and make your channel look more professional and memorable.

The recommended dimensions for a YouTube intro video are 1920 x 1080 pixels (1080p) with an aspect ratio of 16:9. This is the standard resolution for most modern displays and will ensure that your video looks clear and sharp on a wide range of devices.

As for the size, YouTube recommends that the file size of a video should be less than 2 GB and the video duration should be less than 15 minutes. However, for an intro video, it’s better to keep it short, around 10-15 seconds, to grab the viewer’s attention and keep their interest.

It’s also a good idea to use a video format that is optimized for web playback, such as .mp4 or .webm, and to use a high-quality video codec such as H.264 or VP9. This will help ensure that your video looks good and plays smoothly on a wide range of devices and internet speeds.

Use consistent branding: Use your channel’s color scheme and font throughout the intro. This will help to create a cohesive look and make your channel more recognizable.

Use a tagline: If your channel has a tagline, include it in the intro. A tagline can be a memorable phrase that sums up what your channel is all about.

Use a consistent intro across all your videos: Use the same intro for all of your videos to help viewers recognize your channel and keep consistent branding.

By personalizing your YouTube intro with your channel’s branding, you can increase the chances of viewers recognizing your channel and remembering it for future videos. Additionally, by using the same intro across all your videos, you can create a sense of consistency and professionalism.

In conclusion, a YouTube intro maker is a useful tool for creating professional-looking intros for your YouTube videos. It can save you time and effort compared to creating an intro from scratch and can help increase viewer engagement and make your channel more memorable.

It’s important to remember that an intro should be short, around 10-15 seconds long, and should include your channel’s branding, such as logo and color scheme. Also, it’s a good idea to include a call to action and a preview of the type of content viewers can expect to see on your channel. With the right YouTube intro maker, you can create an intro that captures the viewer’s attention and makes your channel more memorable.

What Are The Benefits Of Recharge Extract Transform And Load?